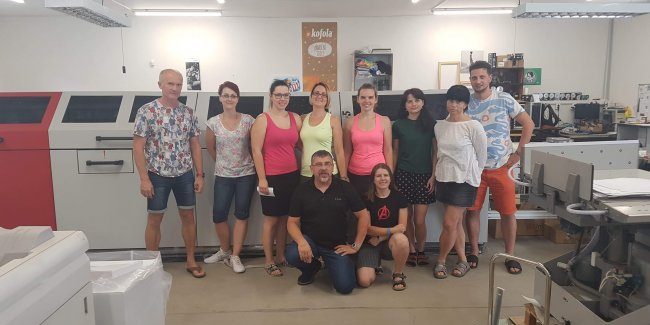 Czech digital printing company, Computer MCL, has completed its transition to a new photo commerce platform with the addition of Taopix Desktop to its existing Online Designer.

The Modrice-based business was founded in 1999 by current CEO, Petr Berousek, and employs 14 staff.

The company began its move to the new platform in 2015 when the Taopix Online Designer was introduced to provide a browser-based design and ordering experience for its customers. The new Online platform was intended to complement the company’s older, desktop application.

Markéta Dokoupilová, MCL’s Project Manager, says “We’d been using a desktop version from another company for years and Petr recognised that there was an opportunity for an Online platform. He set about investigating the market to identify the best software partner to support his future plans. After intensive research, he came to the conclusion that the Taopix photo personalisation platform was the right fit for his business. At the time, it made sense to work with two different technologies.”

“Unfortunately the original supplier stopped all development and we realised that there was no future in that platform. Petr really liked the fact that Taopix was continuously developing its offering and providing regular updates and new features. He also liked the Taopix approach of being both simple and yet advanced. So the decision was made to completely replace the old platform with both Taopix Desktop and Online.”

“Customers in the Czech Republic still prefer a desktop application. The majority of them like the idea of saving their projects to their hard drives and being able to instantly access them even when disconnected from the internet.”

Since the introduction of Taopix, Computer MCL has experienced double digit growth in both volume and revenue.

The company is manufacturing everything in house and is capable of producing hundreds of photo books per hour. All production and finishing processes are fully automated.

The business is mainly focused on high-margin products such as photo books and calendars but is also expanding its offering to a wide range of other photo products, such as canvases and posters.

Future plans include the addition of direct to garment printing and the introduction of the Taopix 3D Designer to give customers a 360 degree view of their designs.